DJ Scurge began his musical adventure as a young teenager with the purchase of his first electric guitar. For a few years he played with several different garage metal bands getting his first taste of preforming at a fellow student’s birthday party. Although the crowd was small and all the songs were covers, had been bitten by the performance bug and would never be the same. Watching people enjoy his performances would be a central driving force in the upcoming years.
In 1999, towards the end of high school Scurge, as he was yet to be known, fell in love with electronic dance music and the rave culture. After spending the entire after-party to his first rave in Nashville, TN mesmerized by the first DJ he had ever seen up close, DJ Marv-C, Scurge scraped up all the extra money he could and bought his first turntables the very next day: a pair of belt driven Gemenis.
Heavily influenced by the grit and angst of metal and industrial music he had been playing as a guitarist, Scurge’s style began to evolve, starting with Jungle and Drum and Bass, then moving into a dark, Hard Trance at house parties when he was convinced by his friends to record a demo. He followed their advice and landed his first real gig in late 2000, an opening Friday night spot at Outer Limit nightclub in Nashville. That turned out to be a very good opportunity to showcase his talent for local promoters and other club owners. Within the next few months Scurge became known for his unusually fast and ominous sounding Hard Trance sets and soon was playing regularly at various clubs around Nashville such as Excess/Orbit, Chrome, Muse, and Katatonic as well as big local events, opening for artists such as Sandra Collins, Baby Anne, Felix the House Cat, and George Acosta. 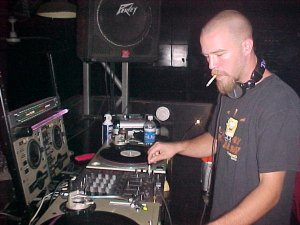 Over time Scurge’s style evolved from Hard Trance, to faster and more ominous UK Hard House. At the time he was also running a local haunted attraction, which helped to influence an almost evil sound to his sets. He gained a reputation for packing dance floors and was one of the most frequently seen DJ’s at Katatonic for the next two years. Scurges passion for dancing also allowed him to “read” and respond to the dance floor during his sets making for an unforgettable dancing experience.
It wasn’t long after that Scurge’s passion for electronic music had taken him so deep into the rabbit hole that he was tinkering with the electronics music equipment themselves. With the decline and subsequent regulations being tightened around the local after hours clubs and the closure of Katatonic in 2004, the opportunity for gigs diminished but Scurge had decided to use the time wisely and enrolled in Tennessee Tech in pursuit of a BS in Electronics Engineering with the intention to further understand electronic music at the deepest, most fundamental level. Several years of hard study and sleepless nights finally payed off when graduation had arrived, but it had been six years since Scurge had spun for a crowd. Now, however, he understood what was happening “under the hood” of all the DJ and production equipment he still made extensive use of in his small home studio.
Ironically fighting the digital revolution of MP3s and controllers over vinyl and SL1200’s. Surge finally succumbed and began to use the more modern DJ tools. His academic background in digital and analog signal processing offer incredible insight into how the electronic sounds are produced, mixed, and manipulated and he makes full use of this in his new DJ mix sets. His style, ever evolving, has slowed down a bit but is no less persuasive to get dancers moving. His mathematical precision and attention to structure and flow of a set are of the highest caliber and his long time love of electronic music and exposure to the evolution of the dance scene poise him to be capable of being the next big name in EDM. This coupled with his inventive nature and engineering experience allow him to create for you the most cutting edge, never before seen technology in electronic sound mixture, synthesis, and manipulation capable of entertaining even the most critical electronic music aficionado.

For Booking, Please complete the form below.

One response to “About”